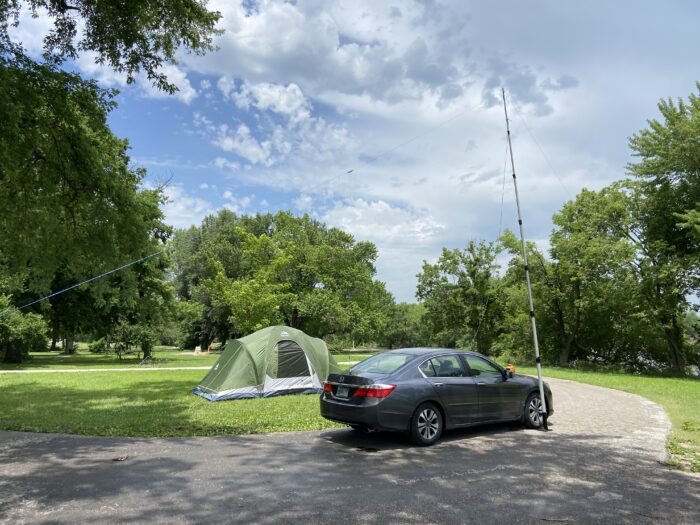 For Field Day this year, I decided to run a solo HF operation from Tuttle Creek State Park (K-2353) in Manhattan, Kansas. At Dayton Hamvention, I bought a Yaesu FT-991a to use for HF and VHF/UHF given that my recent interests have been a lot of car-portable and roving operations. For antenna, I used my Pacific Antenna 20/40m trapped dipole and Max-Gain Systems mast as I did for the 2021 Kansas QSO Party. My goals for this Field Day were to test out the new radio setup and just get out of town for some solo camping.

My spot at Tuttle Creek State Park was near the shore and fairly secluded from other campers. One of my challenges doing ham radio while camping is trying to reserve a spot that gives some privacy and is decent from a radio perspective. This spot was quite good in that regard and gave me a pull-through next to a nice grass patch. I’m continually impressed with the Kansas State Park system and the whole experience at these parks!

I used a cheap 6-person tent and set up a small table on one side and my sleeping arrangements on the other. These cheap tents are always a gamble, and I am usually pretty picky on tents. The weather was supposed to be nice, although hot, so I wasn’t too worried about it leaking. There were some sprinkles forecasted (that came to fruition) so unfortunately I had to keep the rain fly on most of the time. This made it HOT in the tent. The only negative of this camp site was the trees did not provide shade where the level grass way, so I baked out there. 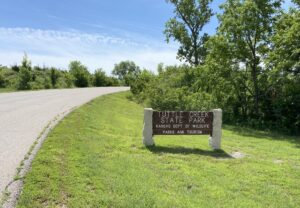 Aside from the heat, I had a great time. The whole radio system worked quite well too. I borrowed a small Generac inverter generator from a friend to power things and that worked well. I actually didn’t have a power supply for the radio, so I used some LiFePO4 batteries that I swapped out and charged off the generator throughout the day. Next year, I’ll likely go solar as the generator was just a hassle to deal with. It also introduced some RF noise which was noticeable but not awful. 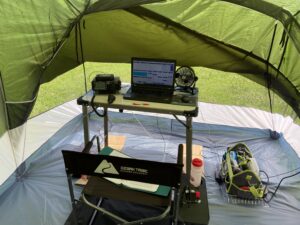 I found that 40m was best for me throughout the weekend with 40 FT8 and 61 SSB contacts. On 20m, I had 12 FT8 and 38 SSB contacts. While those numbers are low, a high score wasn’t an aim of the weekend. I had fun just hanging out, getting comfortable with the new radio, and trying out some cast iron cooking for dinner.

In terms of takeaways, besides preparing the radio’s voice keyed and FT8 settings ahead of time, I realized I need some sort of floor for the tent. This was actually the first time I’ve operated in a camping tent rather than a party tent or other structure. I put cardboard and the table case underneath the table and chair respectively, but a real floor would make it easier to move around the tent and protect it from possible tears. Another item I’m working on is a way to log my transmission time during these events. I’m a real data nerd, so I’m interested in seeing transmit time versus QSOs as a statistic. Perhaps a project post on that is soon to come. Finally, the voltage meter on the 991a is disappointing as it only shows a value during transmit, and it uses a meter which is hard to interpret while also making QSOs. I’ll be adding a small voltage meter to my setup to monitor the batteries.