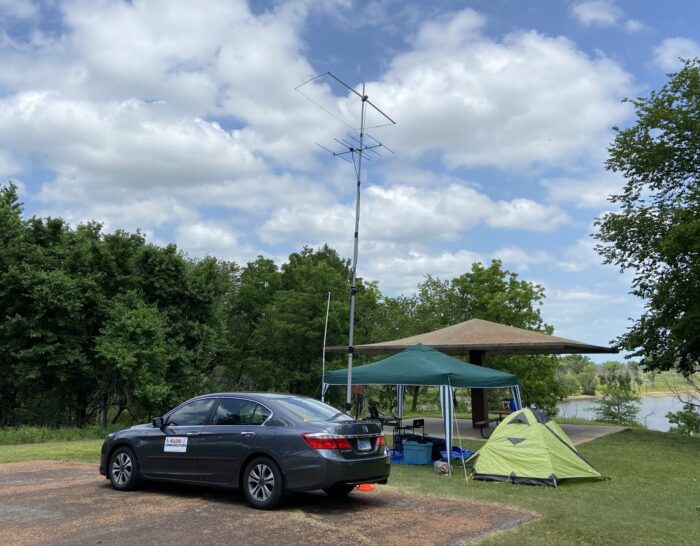 I originally planned to drive down Friday night to camp and knock out a few satellite passes to count toward my attempt to activate all Kansas State Parks on satellites but bad storms were in the area Friday evening which delayed my two and a half hour drive until early Saturday morning (I ended up nixing the plan to make satellite contacts giving this change in plans, so I will definitely be back in the park in the future for that purpose). After arriving, I quickly started to set up my station which revolved around a 25 ft Max Gain Systems telescopic fiberglass mast with drive-on mount. I purchased this several months ago specifically for this contest (and Field Day), and other than a brief test setup at a local park a few weeks ago, it was my first time really putting it through the paces. On that was a Par Electronics 6m Moxon and Diamond 5 element 2m yagi. On the pop-up canopy was a bungee corded PVC pipe with N9TAX 2m/70cm rollup slim jim antenna on it for monitoring 146.52 MHz FM all weekend. Being in the Single Operator Portable category and therefore limited to 10w, I used my new Icom IC-705 as the main station connected to my laptop running WSJT-X and N3FJP’s logging software. My Kenwood TH-D74 served FM monitoring duty. Everything was powered by a portable power pack and solar panel my brother lent me. 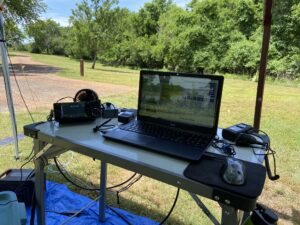 The contest was fairly slow going for most of the weekend. It took a good hour to make my first contact after the contest started despite receiving numerous stations on 6m FT8. Activity slowly increased for me a bit later in the afternoon. I picked up a couple locals on 2m FM and SSB throughout the weekend and had a decent opening out west to California Saturday afternoon and New England on Sunday on 6m. Conrad, K0FCL, was working people on 2m FM all weekend, and I enjoyed chatting with him and appreciated him alerting others to my location. Unlike last year, I never received an answer to any CQs on 6m SSB, although I did make 19 QSOs on that band and mode. Not surprisingly, FT8 was the most fruitful on 6m netting me 54 QSOs. My biggest surprise of the weekend was the three 2m FT8 contacts I was able to make! Considering I was much further from a metro area than I was for 2020 June VHF, I was surprised with what 2m did for me. In the end, I beat my 2020 score by more than two times!

Ahead of the contest, I got in touch with Randy, N0LD, after coming across his rove plans that would put him very near my location. Randy is a part of the OKRover group, and they had two rovers running some grids starting up north near Saint Joseph, MO down to Oklahoma City, OK. I was about 20 miles south of the EM17/18/27/28 grid square at the state park, so we planned to coordinate QSOs when they got close Sunday morning. They also modified their route to pass within a few miles of the park which ended up helping with 70cm and 1.25m FM contacts using the 1/4 wave antenna on my car and a handheld dipole, respectively.

The IC-705 performed flawlessly all weekend, and I continue to be impressed with that little radio. It’s a great portable rig that has served me well for this contest, satellites, and general portable operations. From an antenna perspective, I was fairly pleased with my 6m Moxon and 2m yagi, although SWR was a bit high on the yagi. Upon taking the mast down, I noticed one of the elements was a bit off center, so I’m hoping that was the only issue. I’ll be using the same mast and antenna setup next weekend for Field Day with WD4WDW at Disney World where I’ll be manning the VHF station, so I should find out if that was the issue soon.

All in all, it was a fun weekend albeit quite hot. Temperatures were in the lower 90s during the day but luckily my tent and the breeze kept me fairly cool in the shade. The campsite was beautiful and quiet, and I got a nice visit from the cabin host/park law enforcement officer down the road who was an inactive ham but knew exactly what I was up to. We talked about the contest a bit, and he made a point to check up on me a few times throughout the weekend which was nice. On Sunday I tore down camp by about 3pm since activity was slowing down as was I. From Twitter, it looks like it picked up again a few hours later, but considering I had to work Monday morning, I had little desire to stay much later considering the distance I had to drive home.

I am planning to participate in September VHF for the first time this year, but I’m still deciding if I’ll try some roving or stick with a portable station. Either way, I think I’ll forgo camping as the logistics of solo camping plus a two day contest are just a lot for a person to do on their own. One Field Day per summer is enough for me! If I decide to operate SOP again, I’ll probably just spend the day at the local park and sleep at home Saturday night. This would also encourage me to operate longer on Sunday since I could simply the tear-down and drive home required. On the other hand, roving sounds like a ton of fun, but I would certainly not have a competitive station with my IC-705 and modest antennas. Decisions, decisions!

Stay tuned to my Twitter as we near September to find out what I settle on, and feel free to reach out with any questions about my experience. Thanks for reading!