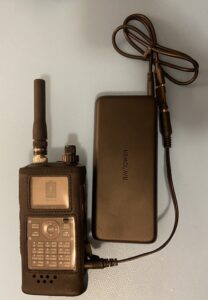 A while back, I built a cable to power 12V devices (in my case a Kenwood TH-D74 HT) using the QuickCharge standard available in some USB power adapters. This allowed me to use a USB charger to charge my HT rather than bringing a dedicated wall wart which helped save some space when I traveled. While my homemade cable was electrically simple and worked as expected, it was a bit clunky. Also, QuickCharge is largely being replaced by USB Power Delivery (USB-PD), and since my laptop chargers using USB-PD, I found that I could consolidate my charging needs further by getting an adapter that works with USB-PD.

Of course, I’m not the first person to try to adapt USB-PD for other purposes, so I was able to find a few products that partially solved this problem. I quickly came across a line of small adapter boards that negotiate the USB-PD protocol and provide an adjustable or preset voltage based on the standard. These are available on Amazon (affiliate links on this page) but can also be found even cheaper on eBay if you’re willing to wait for shipping from China.

For ham radio purposes, we typically want a 12V supply as most equipment expects 13.8V +/- 15%. Conveniently, USB-PD does support a 12V level; however, the adapter board in the family that supports 12V has a button to cycle through the voltage settings. While it will apparently boot up in the last set voltage every time, it supports up to 20V which can damage 13.8V equipment if you happen to bump the button and cycle beyond 12V. There is another variant, known as the ZYPDS, which allows a fixed output of 15V or 20V based on soldered pads on the board. 15V comes presoldered and is within the 15% tolerance for most equipment, so this seemed to be a good option. Be aware that this may be less efficient as some equipment (like the FT-817/818) uses a linear regulator to drop down the voltage to 12V or lower anyway.

Digging a bit further, I saw a Thingiverse project for a 3D printed enclosure for this exact adapter. The creator also recommends a certain 2.1mm barrel plug to fit it as well. I purchased the barrel plugs and had my brother 3D print the enclosure. While there were some tolerance issues that made me forgo the enclosure in the end, the barrel plug soldered on nicely, and I ended up using heatshrink to cover it instead. Just like that, we have a 15V 2.1mm barrel plug power cable from any USB-PD source! 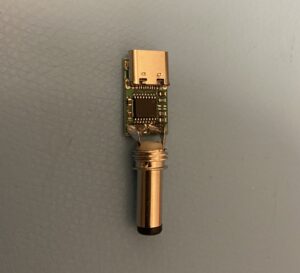 Two items to note right off the bat:

The last piece to use this with my Kenwood TH-D74 was a 2.1mm to 3.5mm barrel plug adapter. I could have soldered a 3.5mm plug on the ZYPDS adapter directly, but I liked the flexibility the 2.1mm barrel plug gives me for other purposes. This short adapter cable from eBay has worked well for me and let’s me also used my Bioenno LiFePO4 charger to charge my TH-D74.

Side note: that Bioenno charger is not really a charger at all. It’s simply a 14.6V regulated supply with an LED that changes color based on a high/low current threshold. The charging circuitry is in the battery pack itself. Also, if you’re curious, I did try plugging the ZYPDS adapter directly into the Bioenno battery to charge it as I’ve heard the Bioenno batteries will accept up 15V before triggering their overvoltage protection. The ZYPDS apparently shut off the moment I plugged it in as I measured zero current and the Bioenno open circuit voltage when connected. I’m thinking the battery tried pulling more than 3A which triggered overcurrent protection on the ZYPDS. Need to experiment more…

If you’ve read up on USB-PD, you may have noticed that you can get 3A or more from a supply when used in 15V mode. This might make you thinking about powering a small radio (such as the Yaesu FT-817/818) from USB-PD directly. You’re correct that this is possible, although there are of course some major considerations. First off, USB-PD chargers use switching power supplies that are not made to be RF quiet. This will really kill any hopes of using the supply to power the radio while connected to the AC mains. Second, we don’t typically use a wall power supply for these low power radios since they’re meant to be used in the field.

What about pairing this with a USB-PD battery pack? First off, there are tons of USB-PD battery packs that support different voltage levels, so finding a good quality one from a reputable brand is the first challenge. I typically stick to major brands (Anker, Ravpower, etc.) in this realm, but I’ve tried a couple. I have one battery that is an 18W model, so it only supports up to 12V. I also have another model that supports 60W which means up to 20V. These clearly use switching boost converters which are typically lousy for ham radio use due to the switching noise they create. Both battery packs work well with my other technology (iPhone, iPad, and Macbook Pro), so I decided to give them a go.

This past weekend, I took both out to the field for some basic, non-scientific A/B testing against my Bioenno 3Ah pack (which is an excellent option for my satellite and brief HF operations). With all three battery packs, I was able to hear many HF signals on my FT-817 and a simple random wire antenna. With both USB-PD battery packs, I was surprised that many of these signals were clean, and the noise floor didn’t seem noticeably high at first. However, upon tuning around, I found some noisy parts of the HF bands that entirely went away when switching to the Bioenno. It was nowhere near as bad as I expected though, and I had a nice time listening in on a bunch of QSOs.

My conclusion is that USB-PD batteries could work in a pinch and for casual QRP HF operation. It certainly didn’t blow out the entire band with a ton of noise, and SWL is definitely doable. You may be better off with the Bioenno or a SLA battery, but you might want to give a USB-PD battery a try. Personally, my main use case for these batteries would be to replace the Bioenno when traveling for satellite roving operations. It would be one fewer battery pack and charger to lug along, so it is attractive. However, given the short passes, weak signals, and especially challenging nature of satellite operations, it seems too big of a risk where the noise could drown out a signal. Perhaps some more testing in the future will build my confidence, but for now, I’ll stick with my Bioenno battery for portable ham radio.

I also want to point out there is a commercial cable, the Blind SPOT 12V USB-PD cable, that KB1HQS tweeted about successfully using with a USB-PD battery pack for some of his SOTA operations. I haven’t used it, but he noted good luck with it. It may be an option if you want something more refined than the ZYPDS adapter I used.

2 thoughts on “Powering a Ham Radio with USB Power Delivery”