I’m a big fan of the Arrow Antenna for satellite operations for its good performance and portability, but one issue that pops up is the constant need to tighten the elements. I leave my Arrow assembled in the back seat of my Honda Accord, so it loosens up on its own. This is annoying from a clanging noise perspective, but it also messes with the performance of the antenna and throws off the SWR.

In a discussion some time ago on Twitter, Mike, W8LID, suggested trying fully aluminum threaded rod as he noticed this eliminated the problem and lessens the weight of the antenna slightly. Apparently, the included threaded studs are zinc plated steel which doesn’t tighten nicely against the aluminum threaded inserts in the arrow shafts. McMaster-Carr sells this threaded rod (8-32), but I found it locally at a metal shop so I saved on shipping costs. You can use a hack saw to cut 2 1/4″ pieces and you’re good to go with some minor filing to clean up the ends. 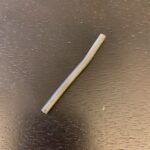 The aluminum studs developed small bends which become big deflections at the end of the 2m elements!

For the past year or so, I used this setup and it did solve the loosening problem nicely, but I recently noticed the elements were looking bent and misaligned. It also was sometimes difficult to dissemble the antenna as the aluminum hardware was binding a bit too tight to get a good grip to loosen it. I’ve been thinking about switching back to the original studs for these reasons, but I was still concerned about the constantly loosening elements.

A couple weeks ago, Sean, KX9X, held a RoverCon on Zoom, which aimed to provide a forum for satellite operators to meet, talk roving, and have a good time. During this, R.J., WY7AA, who is well known for making awesome drilled out masts, mentioned a solution the to loosening elements problem: purple Loctite. Purple Loctite, or officially Loctite 222, is a low strength threadlocker, weaker than the more common blue Loctite. He suggested putting a dab of it on one side of the threads to lock in the stud into one side of the arrow shaft. This leaves the other side free to easily dissemble, but prevents them from loosening on their own. I ended up using off-brand threadlocker on my own (Permatex 24024). I’ll update this if I have any issues in the future, but I look forward to have a nice and snug Arrow Antenna again without the fragility of aluminum studs!

Put a small dab of the threadlocker on the stud