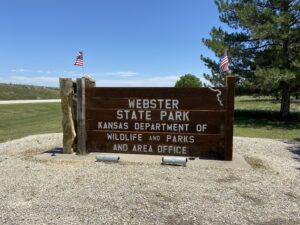 After spending the night in Concordia, Kansas (see my 7/2 activations for more information on the preceding stops), I headed toward Webster State Park on the morning of July 3rd to grab some of the FM passes. After arriving and driving around a bit, I found the park fairly full (which makes sense given it was 4th of July weekend), so there weren’t any areas with a shelter available for me to use for a few hours. I decided to park at the Archery Range which was empty and on a hillside. This is not the first POTA activation I’ve done from a state park archery range, and I often find these as decent options since they are rarely in use when I’m at the park. This one had a couple picnic tables but no shade, so I mostly hung around my car.

Since I had a decent drive to my next hotel in Colby, KS, I wanted to make this activation fairly quick. I chose to just do FM passes over the course of a couple hours. Since I was in EM09 as I had been the day before, I knew many people had already worked me who needed the grid. However, I was surprised that there were plenty more who still wanted it! It was a busy few passes with 25 total QSOs:

While it was a beautiful and quiet park, I found it rather small compared to the others I have visited. There also wasn’t really any sizable day use area outside the beach itself. I could see myself coming back to camp at the park, but I don’t think I’d make another day trip based on what was there. Still, I’m glad I visited and got to see a new area!

After the passes, I head toward Colby which was about an hour and a half drive. Since Colby is actually in the DM99 grid, I thought I’d take my stop there as an opportunity to work a few passes from a new-to-me grid. After scouting a few different parks around the city, I settled on the baseball fields on the north side of town where there were a few picnic tables out in a grassy area off the side. I set up my linear satellite rig and prepared for a few passes:

On the XW-2D pass, I heard and almost work W5CBF; however, it is in a weird mode on for a couple seconds then off for a few more seconds. This is apparently common for these birds as XW-2C and CAS-6 exhibit the same behavior, and it is a telltale sign of the bird failing (perhaps a power issue?). In any case, it was nearly unusable as I could only get either “KD8” or “RTT” out when it was on. I know some people have continued to make QSOs on these birds despite the situation, but is definitely tough.

I was happy to give out DM99 to some people while I was there, though, as it is a fairly sought after grid according to the GridMaster Heat Map (as of July 2020). Unfortunately there were no convenient FM passes to get on while I was there, so perhaps I’ll be back in the future to activate it once again. I did battle some local RFI from this location, however. While I was on the north side of town, the park was mostly surrounded by a residential area and there were some high tension lines only a hundred yards away or so. If I return to Colby, I’ll be trying a different location for satellites. After leaving, I headed back to the hotel for the night and prepared for another park and grid line the following day. 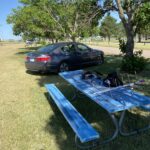 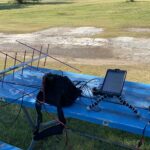