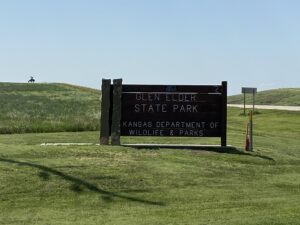 As the second stop on my 4th of July weekend rove after Lovewell State Park, Glen Elder State Park provided another nice place to give out the EM09 grid to many of my fellow satellite operators who needed it. I arrived in the middle of the day and quickly searched for a good operating position. As the AO-91 and AO-92 passes (the easy FM ones) coincided with my Lovewell activation, I knew this park could be a bit of a challenge to activate in a short amount of time. After leaving this park, I knew I had about another hour drive to my hotel in Concordia, KS which added to my desire to make this quick. I had already driven over four hours from the Kansas City area that morning, so I was tired to say the least.

I couldn’t find a designated day use area, so I drove out into the camping area which does not specify sites. On the shores of Waconda lake was a grassy area with a couple picnic tables which was not being occupied by any campers. This gave me a good horizon and my own space, but there was no shade which meant I spent much of my time between passes in my car with the air conditioning blasting.

I quickly got set up to work SO-50 and PO-101 which both netted me several contacts. At this time, I still did not realize that working the same station on multiple bands (in this case, satellites with different uplink bands) counted as separate QSOs for POTA, so I thought I was one short of the ten required. This made me pull out my gear for linear transponders and jump on an RS-44 pass. I made several contacts on there, including one with K2J, one of the 13 Colonies Special Event stations. My breakdown by pass:

By the end of those there passes (which occurred over about a two and half hour period), I was ready to head toward the hotel. This activation confirmed one of my concerns with this trip in general: trying to activate several parks in a single day is exhausting. Satellite operations present some challenges since you are limited to discrete passes to make contacts. It’s fun, of course, but can be stressful trying to make a long drive worthwhile with a successful activation particularly when each linear transponder pass may only get a few QSOs . The rest of this trip was more relaxed with only one park on each of the remaining days, plus a few other non-park activations which did not have the ten QSO minimum. I will say that these types of activations have been beneficial for me since they have pushed me to utilize the linear transponder satellites more and more. I like to force myself to adapt and make the situation work, so while I complain, I actually kind of like the challenge…

After Glen Elder, I headed to Concordia, Kansas for the night. The next morning, I’d make my way to Webster State still in EM09 before heading to DM99 in Colby, Kansas to give out a highly desired grid on a few passes. Check out my overview page for links to the activations on the following two days. 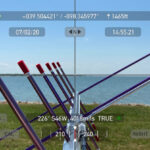 I had a nice horizon out in front of me overlooking Lake Waconda. 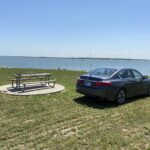 While quiet and open, this operating location left me baking out in the sun!