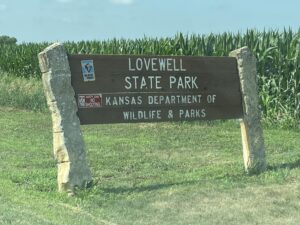 This year for the 4th of July holiday weekend, I decided to do a four day rove to hit four new POTA parks (K-2343, K-2339, K-2354, K-2349) and four new grids (EM09, DM99, DN90, EN00) around northern Kansas. I’ll be posting a separate writeup for each park, so check out my overview page for links to the other activations. On Thursday the 2nd, I left my home in the Kansas City suburbs early in the morning for the approximately four hour drive. I decided to head north to St. Joseph and then travel US 36 almost the rest of the way which was a much nicer drive than the alternate I-70 option. I got to travel through a bunch of small towns and see a real beautiful part of rural Kansas. The drive up was mostly uneventful, although as I neared Lovewell, Google Maps routed me down a gravel road that soon turned to dirt. As I rounded a hill, the back end of my car started to slide around me, and although I didn’t spin out, I ended up in the mud and stuck. Using some of my snow driving skill learned during my Ohio upbringing, I switched off traction control, and my front wheel drive Honda Accord was able to make it on its way. I nearly got stuck two more times on that road before before hitting pavement again. A little rattled and worried if I’d miss my first planned pass at the park, I raced down the country roads in my now mud-caked sedan.

After arriving at the park, I realized I had made a mistake with my early planning. I had advertised my rove on Twitter as being in EM19 on 7/2 for both parks. Apparently I had not checked maps close enough, and I was actually just over in EM09. This eliminated an additional grid from this trip (and surely frustrated some expecting that grid from me). I plan to be back in EM19 soon, however, as there are several parks there to activate.

I had a couple FM passes coming up quickly, so I found the first good place which was actually out on a small peninsula extending into the Lovewell Reservoir next to the boat ramp. This gave me a relatively good operating point overlooking the lake, and I rushed to get on AO-92 and AO-91. I made a few contacts on each but being in that spot was uncomfortable with the hot sun and no shade. I decided to look for a better spot for a few more passes, so I drove over to a day-use site which had a nice pavilion for some shade. It overlooked the lake on the same side, but was up the hill away from the water a bit. However, I was happy with the compromise given the weather. I worked a linear pass of CAS-4B and another AO-92 and AO-91 pass from that spot. As EM09 is a fairly desired grid on satellites, lots of other ops were looking to make the contact for that reason. All in all, I made 29 QSOs from the park with the following breakdown:

I drove around the park a bit to see the campsites but didn’t spend too much time there since I had another park to get to that day. Doing multiple POTA activations within the same day is a challenge when contending with satellite passes. Since I drove such a long distance, I wanted to be sure I truly activated each park and made the trip worthwhile. With another park on the schedule, I took a quick break for lunch and then started my travels to Glen Elder State Park (K-2339) about an hour away. Find a link to that activation report here.

I worked my first couple passes from this small jetty next to the boat ramp.

I did the next few passes from a pavilion on the hillside which provided some nice shade.