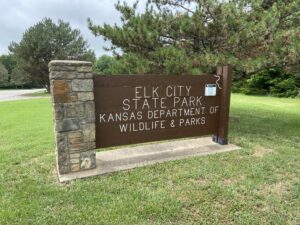 After going back and forth on plans for Field Day this year, I decided to do it as a satellite-only operation from Elk City State Park to double dip on my goal to activate all Kansas State Parks on satellites. I reserved one of the campsites right on the shore of the Elk City Reservoir which gave me a decent horizon around, although there was some terrain north of me facing away from the reservoir. I planned a 1B KS – Battery operation for the event.

After the nearly three hour drive down from Kansas City on Saturday, I got to the campsite around 2pm or 3pm and quickly set up my tent. The RV/camper section of the campsite was packed full, but the tent area where I set up was mostly empty. This was nice because it allowed me to operate without annoying any neighbors with my passes throughout the day. Unfortunately, I was too late to make some of the early FM satellite passes of the day, so I prepared for a long list of linear transponder satellites. My goal for this Field Day was to 1) activate the park for Parks on the Air, 2) have fun camping, and 3) get some more practice on the linear transponders. Looking back, I accomplished all three, but not without some frustrations. Additionally, the rules for ARRL Field Day, AMSAT Field Day, and POTA meant three separate logs that were all counted differently. 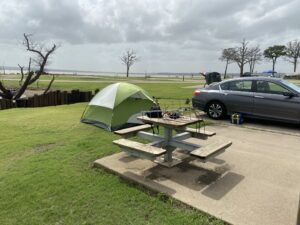 One of the challenges with Parks on the Air, is the fact that the activation window resets at 0000z. The rules require you to make 10 QSOs in the same UTC day to count as a valid activation. This isn’t a big problem for most HF operators I would imagine, but the nature of satellite operations only allowing specific windows throughout the day makes it harder depending on what time you get started. Additionally, each band and mode are counted separately towards that ten QSO minimum. This means working the same op on a VHF-uplink sat and a UHF-uplink sat counts as two contacts (I didn’t know this at the time, which added to my frustrations of the day).

Since the midnight UTC is 7pm central time, I only had a couple hours to get it done on Saturday. There were only four passes before that time, and they were all linear satellites. I went to bed around 11pm with plans to be up by 6am to get on some more passes while abiding by the 11-6 quiet hours in the park. Unfortunately, I didn’t sleep too well that night as it was a windy night, and I crawled out of bed by 5am. I worked five more passes that morning including my only FM sat of the event, SO-50. On Field Day, FM sats are limited to one contact per person, so while I can often activate a park with ten QSOs on one pass of an FM bird, that was not an option here. I decided to leave around 8am since the next satellite pass was a few hours away, and I was just tired and done with the whole affair.

After I got home and took a nap, I transcribed my passes and found that I didn’t make ten QSOs with different stations on either UTC day. I was pretty disappointed as it felt like a wasted weekend. However, when I submitted my logs and they posted to the Parks on the Air website, I saw I did in fact activate the park on Sunday. After digging a bit more, I found that each band counted separately, so I got my ten. This brings up what I consider to be a gap in the POTA program for satellites: there is no reference to satellite operations on the POTA dashboard for activations; it simply listed each contact as on 2m or 70cm (depending on the satellite uplink), which doesn’t really capture the spirit of a satellite contact. If the POTA administrators read this, I would suggest the rules be expanded to count each satellite as a separate band. I understand POTA is largely an HF program with satellites as an afterthought, and I’m grateful satellites are counted at all, but I think this would be a major improvement. Since satellite ops are limited by when satellite passes occur and each satellite has its own “character” and quirks, I think this would make more sense and level the playing field against HF activations. Just my thoughts.

Like I mentioned, I had three (well, four if you count each UTC day for POTA) submitted logs from this activity. One of my contacts did not participate in Field Day and did not give me an exchange, so while I could count them for POTA, I could not count them for the Field Day logs. For ARRL Field Day, I got bonus points for 100% emergency power, operating from a public location, making a satellite QSO, and entering via the web.

All said and done, it was an exhausting event. Although I typically like to do the overnight run on 40m and 80m for Field Day and pull an all nighter, I was still tired from this comparatively basic operation. Between only getting a couple hours of sleep, the heat, constant wind, the long drives each way, and initially thinking I didn’t make the POTA activation, I wasn’t feeling great about how the weekend went. In hindsight, it was a good experience, and gave me a lot of practice on linear transponders. I was easily calling CQ and picking out stations by the end of the weekend which really built my confidence for the next weekend’s rove. I also had one camper come over during the event to ask what I was doing which gave me a good opportunity to explain amateur radio a bit. I always enjoy the opportunity to tell people a bit about ham radio, even if they tend to come over while I’m in the middle of a pass!