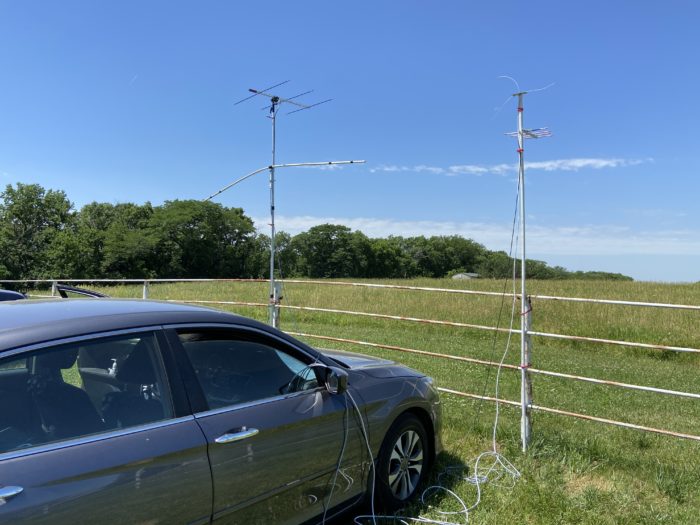 I operated from EM28ox in the Kansas City metro.

I started by scouting out locations near my home based on public access (so parks for the most part), elevation, and a way to mount a portable antenna mast. In the end, I chose the Oakridge Park parking lot in Shawnee Mission Park, an area I’ve done satellite operations from in the past, as it had a decent elevation (for Kansas, anyway), but more importantly, a metal fence along parking lot which was perfect to bungee a mast to for support.

I went to the park on a few Saturdays at the end of May and beginning of June to try out some ideas. I’ve worked very little 6m in the past, so I made a simple 6m dipole out of 1/2″ PVC pipe, a tee fitting, and some wire taped on it. I soldered a chopped off piece of BNC cable I had in the junk box, and put it up on a “mast” about 12 feet in the air. After some testing and tuning, I got the SWR dip centered around the FT8 frequency, although just about the whole 6m band was under 2:1 SWR. I made a few contacts on 6m immediately afterward using 5w and my FT-817ND, so I was convinced this was a useable setup even with such low power. Success!

The “mast” I used was actually an aluminum telescopic boat hook which conveniently had a painter’s pole threading on the top as well. I used hose clamps and a scrap piece of 1/2″ PVC pipe to attach the dipole, and then used a LockJaw Tool Holder on the threaded part to hold my Arrow Antenna (using the awesome drilled-out boom WY7AA made me!) horizontally for 2m. Unfortunately, in hopes of maintaining decent spacing for the antennas to work as desired, I decided to put the 6m dipole was put about three feet from the top of the mast (at around nine feet). This still worked, but looked fairly low.

With 2m and 6m weak signal solutions in place, I looked at the other bands I wanted to cover. For simplicity, I decided to use my Icom IC-5100 already installed in my car with trunk mount antenna as a 5w 2m/70cm FM station. For 70cm weak signal, I originally wanted to also put my Shorty Arrow yagi on the mast for 70cm as well. This is a four element yagi that can be mounted at the end, but that just seemed to be too much antenna too close together on the same mast. To remedy this, I purchased a 10 foot piece of 3/4″ PVC pipe to act as a secondary mast which I also bungeed to the same metal fence a few feet away. With room at the top for something else, and a realization that I had 1.25m capability in my Kenwood TH-D74 handheld radio, I threw together a simple ground plane antenna using some wire and a panel F connector. Since I didn’t anticipate much activity on this band, I decided to use some leftover RG-6 TV coax to feed it as I needed my “better” coax for the other antennas (more on this later). One note on the PVC pipe: while it works well for temporary antennas and masts, don’t leave it in your car during a week of 90+ degree days or it’ll sag like mine did. 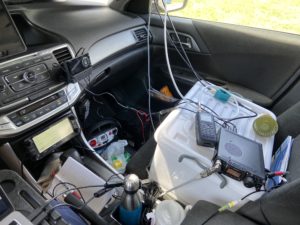 My setup in the car was a bit of a mess, but it was usable… I guess.

To recap, I had 6m, 2m, 1.25m, and 70cm capabilities using my FT-817ND, IC-5100, and TH-D74 radios. The equipment was rounded out with my MacBook Pro for logging (I used RUMlog) and FT8 (with WSJT-X), a 35 Ah sealed lead acid battery, an unknown capacity jumper pack backup, and a bunch of cabling to get everything connected. I mounted this in my car the best I could, although I never found a great solution and need to give this more thought for next time. Although I was portable and stationary, I decided to operate from my car because A) it was in the 90s all weekend and I needed the AC and B) it was a nice power source for the IC-5100 and backup for other purposes (as turned out was necessary). I placed the radio on a plastic tub on the passenger seat, my laptop on a steering wheel desk, and ran the cables out the window. Coax is an area I need to work on as well. Not doing much VHF in the past, I had a long piece (50 ft?) and shorter piece (20 ft?) of RG-8X with PL-259s as well as 16 ft RG-58 with SMA connectors. This not only meant inefficiencies due to cable type and lengths, but also a mess of adapters as my antennas were all BNC-based. Like I mentioned, the RG-6 was used for the 1.25m antenna for a “better than nothing” solution. If I continue these contests, I definitely need to invest in the proper coax. 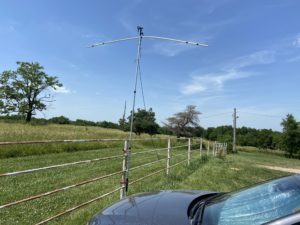 For Sunday, I only set up the 6m dipole atop the 12 foot mast.

I operated for around six hours on Saturday starting from the beginning of the contest, and another six hours or so Sunday morning/afternoon. After starting on Saturday, I quickly made a few SSB 6m contacts, then switched to FT8 for awhile. It was at this point when I realized my first challenge: the FT-817 cigarette lighter style adapter I was using was too high of gauge, and at full keydown, the voltage was dipping enough to roll back my power output. I switched the adapter to the car, so I wasn’t using my separate batteries. This fixed the problem since the car battery was being floated at a higher voltage by the alternator but meant I really had to leave the car on now. I also discovered that while the steering wheel desk is a neat idea and works well, every time I wanted to get out of the car to rotate the mast, I had to remove the desk and set it and the laptop somewhere since there wasn’t enough room to get out of the car with it in place. This got progressively more annoying as the day went on and was compounded by my USB C cables getting disconnected in the move which necessitated restarting WSJT-X because the rig control got messed up. I think a docking station type adapter will make this connection more robust than individual USB C adapters.

The steering wheel desk is a neat idea, but I had to remove it every time I wanted to get out of the car to rotate the mast.

As for contacts, Saturday was really slow. I had 17 contacts by the end of the day including one 1.25m FM contact (the only I made all weekend on that band). Most of the contacts were FT8 on 6m, but I had a couple other 2m FM and 6m SSB QSOs mixed in there. I was disappointed to find 2m SSB dead all day in my area. I never heard anyone there, and I didn’t even bother 70cm SSB. I tore down the setup in the evening and went home for the night. To be honest, I wasn’t looking forward to Sunday based on my experience so far, and I considered just calling it there. Still, I made up a quick and dirty replacement cable to fix the voltage drop problem on the FT817ND that night, and figured I’d decide in the morning what my Sunday plan would be, if anything.

After hearing about a 6m opening on Twitter, I headed back to the park around 10am Sunday morning. I quickly set up but decided to only put the 6m dipole on the mast, this time at the top in hopes it’d perform a bit better. I didn’t bother with the other yagis or 1.25m ground plane based on the activity the day before. I made a bunch of 6m SSB QSOs, mostly into the NY/PA area, but also out west into Utah and Arizona. In about an hour of operating, I more than doubled my score from the entire previous day. During this opening, I even was able to call CQ for a bit and get a handful of responses. On 5w! I now see why it’s called the “magic band.” From my CQ on 6m, I ended up having a chat with a ham, K0RON, about 15 miles away, and we decided to try 2m FM. Despite having a vertically polarized beam on his end, he could never hear me call him back with my 5w into the vertical on the car. After several calls over the next few hours, I finally realized I could use my Arrow Antenna handheld with my TH-D74. I jumped out of the car and pointed at him, and he came right back to me. We had a nice chat on 2m before switching to 70cm to do the same. Although this was a lot of time and effort for two contacts, I really enjoyed it as it gave me the opportunity to meet a local ham and switch up the monotony of 6m FT8. 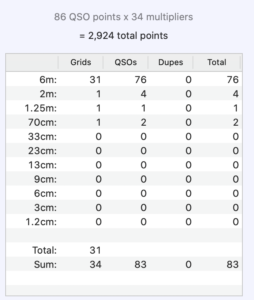 By around 6pm Sunday, 6m was mostly closed, and I decided to tear down and head home. All in all, it was a ton of fun, although I definitely did not feel that way Saturday evening. I was thinking of only spending a couple hours on Sunday, but things got so exciting that I just kept going. I ended up with 83 QSOs, 76 of which were on 6m, and 31 unique grids. The few FM contacts sprinkled in my log were a nice bonus but nothing significant. I was impressed that 5w was enough to make many contacts on 6m when the band was open, so I think this is something I will try again for September VHF. Like I mentioned above, I have several items on my list to improve/rethink for next time. I’m also planning to build a 6m Moxon to replace the dipole and hopefully get a little more from my 5w signal. See you in September!