As the first step on my mission to activate all Kansas State Parks for Parks on the Air, I decided to visit the park nearest to my home in the suburbs of Kansas City – Hillsdale State Park. This park has numerous RV and tent campsites as well as a few day areas spread around Hillsdale Reservoir. I arrived fairly early in the day on April 25, 2020, and it wasn’t hard to find some space away from other people (keeping in mind the COVID-19 social distancing restrictions). I eventually found the archery range which was empty and had a wooden tower in front of a few targets which seemed like a perfect place to operate satellites from with a bit of a height boost. I was able to work two passes from this location before having to move elsewhere in the park since some other people arrived who wanted to use the area. The second location was near a day-use shelter, and I worked from the trunk of my car.

My plan was to be on three satellite passes throughout the afternoon, although in the end I stuck around for a fourth pass. As this park is in my home grid of EM28 and within my “VUCC circle,” these contacts also counted towards VUCC from my home location. As of the time of writing, I’ve confirmed five new grids from this activation, bringing my VUCC total to 113 grids. While at the park, I made 23 contacts in total which broke down accordingly for each pass: 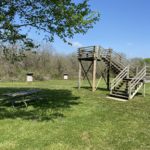 This archery tower provided me a slightly better view of the horizon and some height above the surrounding trees for my first two passes of the day. 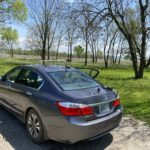 My second operating spot was near one of the day-use shelters overlooking the reservoir.

A couple other interesting notes for this activation: 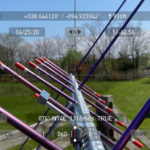 Theodolite screenshot from the top of the tower for my first two passes of the day. 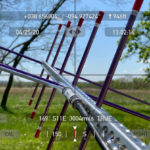 Theodolite screenshot from the day-use area for the final two passes of the day.

This is a part of my goal to activate all Kansas State Parks on satellites for the Parks on the Air program.