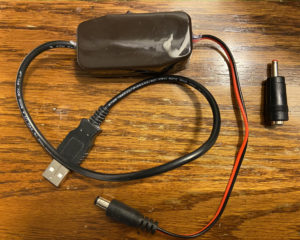 As I got interested in roving more for satellite operations, I was looking for ways to slim down the equipment I needed to carry, particularly on trips that require a flight. While packing one night, I noticed I had a Tronsmart WC2F USB power adapter that supports the Qualcomm Quick Charge 2.0 protocol. This is one of several protocols that let devices use higher voltages and currents over a standard USB A connector. There are a few versions, but in short, this protocol allows for the USB power adapter to supply 12V at 1.5A, among other less interesting voltages (to me anyway). This seemed like a perfect way to charge my 12V devices – my Kenwood TH-D74, Ailunce HD-1, and Yaesu FT-817ND – without having to bring along an additional wall wart. 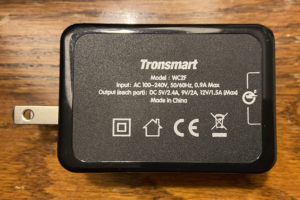 After digging a bit, I found an article on Hackaday where someone made a custom power adapter using Digispark, a modified regulator, and some simple handshaking code. Going down into the comments, Sam Mallicoat mentions the handshake can simply be done with a couple resistors and a momentary switch. Even better, Horst Leykam replied that a regular old latching SPST could work instead of a momentary switch. Aha! Since I was trying to keep this compact, this seemed like a great option compared to adding a microcontroller to the system. My plan was to made a cable adapter with an in-line switch that contained the resistors. A USB A male connector on one end and 2.1mm barrel connector on the other would give me good compatibility with my devices. 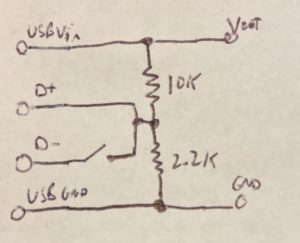 For the switch, I ended up buying a simple Leviton in-line lamp cord switch which is large enough to hold the resistors inside and can be found online or a hardware store. I unfortunately didn’t take photos at the time, and I admit it wasn’t pretty inside; I had to use some hot glue to keep wires where I wanted them and rip out the regular lamp cord contacts. But still, it was not too difficult of a project.  As this uses a SPST switch, the operation is as follows:

Note that this switch does not control power entirely; when the switch is in the off position and before cycling it, it will still be outputting 5V. This is likely not an issue for a 12V device, but of course, proceed at your own risk! 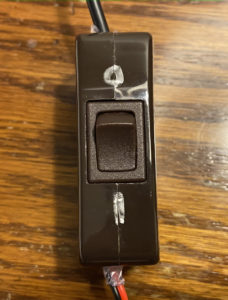 While I know my adapter could be prettier, I’ve been happy with it so far. I have 2.1mm y-splitter cable which allows me to charge two devices at a time, usually my D74 (with a small connector adapter) and HD-1 or D74 and 817ND. While it could actually run one of those devices at a time based on its current capability, the inexpensive switching regulator in the Tronsmart is expectedly noisy, so this really should only be used as a charger. Since the Tronsmart is a dual USB port charger, I can bring this adapter to charge my radios and iPhone or iPad all from the same outlet at the same time.