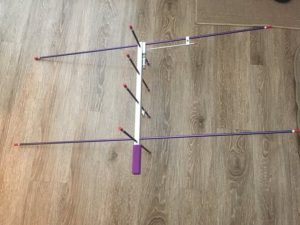 After seeing a few people on Twitter with a a shortened Arrow Antenna for satellite operations (colloquially called a “Shorty Arrow”), I decided to try to build my own. Rather than three elements on 2m and seven elements on 70cm as with the regular Arrow Antenna, the shorty arrow has two elements on 2m and four elements on 70cm. This results in a more compact and lightweight antenna at the expense of gain, particularly on 70cm. In my experience, this limits the antennas use down near the horizon especially if you have foliage in the way, and it is definitely a bit more of a challenge to get into some sats. Still, I’ve made plenty of FM contacts using 5w radios and this antenna even on weekend passes. I particularly like using this setup when I travel somewhere via airplane as this is small enough to fit in a carry-on bag.

Since you’ll need the antenna elements anyway, I suggest you buy a full size Arrow if you don’t have one already and just share the elements between them. It also saves you having to bother with measuring and centering the holes you drill; just clamp the full sized Arrow to the shorty to drill like I describe below.

The build process is actually really simple and doesn’t require any measuring: