Back in September, I took a trip to Peru with some college buddies. Although none of these friends are hams, it seemed obvious to me that this trip had to include some ham radio, so I decided to bring along my satellite gear. 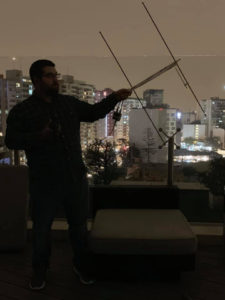 A late-night attempt to work AO-92 from the pool deck of the Hilton Lima Miraflores.

I started with visiting the ARRL website that provides details on getting a reciprocal license in Peru. Their instructions were to write to Radio Club Peruano (RCP), the national Peruvian amateur radio organization, with a bunch of information at least 40 days before arriving in Peru. I actually first sent a message using the contact form on the Radio Club Peruano website about three months before my trip, but never received a reply. I then decided to send a physical mailing with all the requested information to Radio Club Peruano about 60 days before my trip. A couple weeks later, I followed up with an email copied to every RCP official’s email address I could find. I never received a response to any of these messages which was very disappointing.

Finally, I realized after some more digging that as a US ham I did not need a formal reciprocal license but instead could apply for an International Amateur Radio Permit (IARP) through the ARRL. By this point, I was less than a month from departure day, so I was pleased when I got a prompt response from Amanda at the League who was able to quickly process and turn around my IARP. Within about a week or so, I got my permit in the mail. Awesome!

The next hurdle was the customs regulations. Peru actually has fairly strict rules for what items you can bring in without paying a duty. They specifically call out that only one broadcast radio can be brought in, and although it does not mention ham radios in particular, I did not feel it was worthwhile to argue with a customs agent. This prevented me from using the Ailunce HD-1/Kenwood TH-D74 combination I typically like to use for FM satellites. I decided to bring along my Shorty Arrow and an Alinco DJ-G7 HT which is a full-duplex radio. I also brought some cabling so I could use my iPhone as an audio recorder. The G7 is known to be only a mediocre radio for VHF/UHF full-duplex, but I was hoping it would be good enough for this trip.

Interestingly, in hindsight, I could have easily gotten away with my preferred setup due to the customs process at Lima’s airport. After collecting your luggage, you could either walk towards the green sign which means you had nothing to declare or the red sign which meant you were declaring something and had to go up to a desk. However, the green sign simply led you outside with no check by anyone; I suppose you could be randomly searched, but the crowd was so big that this would practically have not been an issue. Still, I do not recommend you try to lie in this process since the fines can be pretty big.

Although I planned to operate in Puno, Cusco, and Lima, time and altitude sickness prevented me from doing so except in Lima. We were staying at the Hilton Lima Miraflores (which is a fantastic hotel, by the way) which had a rooftop pool that was closed for renovation. This seemed promising at first though since they left the doors unlocked and it was totally empty up there. I attempted a decent AO-92 pass out over the ocean, but it was a total bust. The noise floor was so high that I couldn’t hear a thing despite having perfect line of sight for much of the pass. Oh well, I tried.

In the end, it was frustrating to not get a single grid in the log from this once-in-a-lifetime trip. However, it was still a lot of fun and very memorable overall. I got to go out on Lake Titicaca, see Machu Picchu, and explore Lima with a few college friends. Oh, and I also nearly got stuck in Lima due to American Airlines canceling my flight and almost leaving me stranded for three more days. Exciting to say the least!