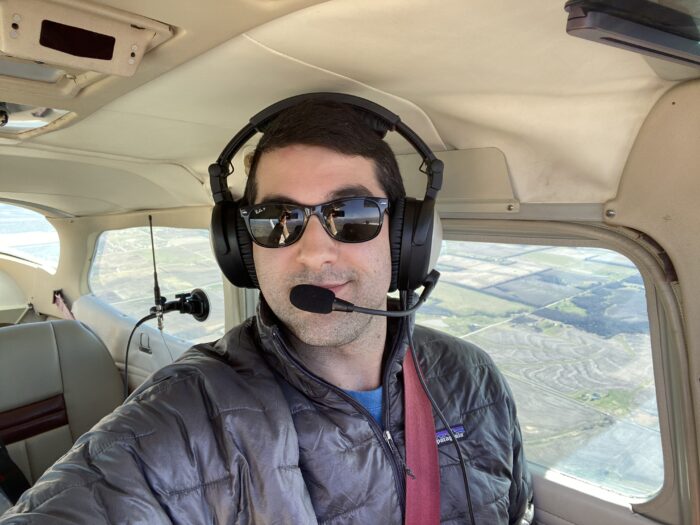 Since I got my pilot license back in 2016, I’ve been wanting to bring the radio in the cockpit for some airborne mobile ops. Although I did set up some APRS tracking of me flying once, I’ve been putting off figuring out all the logistics of some basic 2m operation in the airplane.

While I’ve found some people who have installed a mobile radio into their aircraft, I rent the airplane I fly, so I need something portable. This means there are really two main aspects that need to be handled in terms of making it happen: managing audio with the radio and optimizing the antenna situation. I’ve solved this by using a handheld radio with Bluetooth audio capabilities and a custom suction cup mount for the antenna to keep it vertical and near the window.

My Kenwood TH-D74 handheld radio is my go-to for casual operations given all its features and versatility. This feature set also makes the D74 perfect for this application with its built-in Bluetooth capabilities. In the flying world, most modern headsets include Bluetooth to interface with your cell phone for on-ground IFR clearances and listening to music. It just so happens that my Lightspeed Sierra headset (affiliate link) includes Bluetooth that pairs successfully with the TH-D74 for audio in and out. To key the radio, I just use the regular PTT button on the side.

Since the Bluetooth audio is considered secondary to the aircraft radios, the headset will automatically mute it when audio is picked up on the aircraft intercom. This means that you shouldn’t use ham radio while talking to ATC; I did my operations in Class E airspace where I did not need to talk to anyone. This also means that every time I spoke through the headset, the side tone of the intercom mutes the Bluetooth audio for a few seconds after I stopped talking. I had to ask several hams to wait a second or two to respond after I ended my transmission to handle this delay.

Further, I tuned off-frequency from local CTAF to prevent accidental muting from other aircraft. This does mean you need to be more vigilant for nearby aircraft traffic. ADS-B and looking outside are important, especially since I’m flying as a lone pilot. A good, clear, VFR day in quiet airspace is an absolute requirement for this type of solo activity in my opinion. 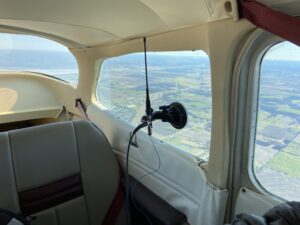 On the antenna front, I’ve given a lot of thought to a simple but usable solution. While you could hold the radio up near the window with the rubber ducky antenna and have reasonable results, this gets tiring. I prefer to lay the radio on the seat next to me and just grab it as needed to key it. I’ve been working on a mounting scheme for a rubber ducky (or slightly better antenna) on a suction cup on the window. What I came up with worked really well! I basically took a 1/4-20 tripod-thread suction cup mount, made a small PCB with BNC connections on it, and mounted it to the suction cup with a wingnut. I then used a BNC jumper to connect it to the radio by running it from the back seats to the co-pilot seat. I also added a “tiger tail” as the other half the dipole, but to be honest, that probably isn’t worth it.

I have heard of other hams disconnecting the ELT antenna in the tail and connecting their radio there instead with a BNC jumper. This is viable as the ELT operates on 121.500 MHz and the antenna is generally good enough of a match for an HT to handle. I haven’t tried this, but it would certainly improve the setup given the exterior antenna placement and good ground plane. Perhaps something to try in the future. Note the ELT has an additional antenna on itself so disconnecting the external one won’t totally disable it if is needed, but it is still something to keep in mind. At 3500′ MSL, 5W is more than enough to get some good distance (most general aviation aircraft only have a 10W radio installed, although AM is used rather than FM).

And that is all there really is to it! This simple setup was more than good enough for casual operations, and it is something I plan to keep playing with in the future. I really enjoy experimenting with equipment in this way, and although I’m not the first to do this, bringing ham radio into the airplane is a really cool way to mix my hobbies and do something somewhat unusual.

I also recorded my operations if you’d like to listen here. Let me know if you have any ideas for improving this or stories of your own successes and failures flying with ham radio.