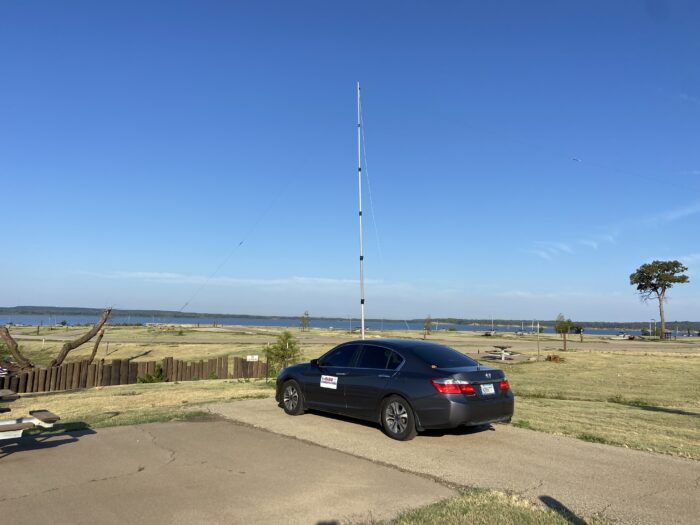 Another Kansas QSO Party is in the books! I had a great weekend traveling through southern Kansas activating six counties along the way as 1×1 W0P. I used the same setup as described in my 2022 Field Day Report except I operated from the backseat of my car instead. I addressed some items I discovered during Field Day and CQ WW VHF contest operations as well. I was strictly SSB this year with all operations on 20m and 40m as a rover station.

Unlike last year, I was able to run through my entire planned route with Montgomery, Elk, Chautauqua, and Cowley counties on Saturday and Pratt and Kingman counties on Sunday. After work on Friday, I drove down to Elk City State Park near Independence, Kansas to spend the night. In the morning, I set up at my campsite (the photo above is this location) as this state park is in Montgomery county.  Saturday  night  was  spent  at  a hotel  in  Wichita. 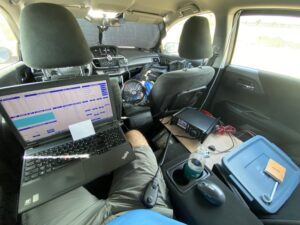 My operating position in the backseat of the car worked out quite well this time. Since CQ WW VHF, I built a wooden shelf of sorts using a scrap 4×4 for a leg and a piece of plywood. This gave me an extension off the seat to better angle the radio toward me. I used some rubberized straps to hold it in place so I could drive without tearing it down. This part worked perfectly all weekend! My LiFePO4 batteries were kept in the plastic bin against the seatback and a power station with built-in inverter was positioned on the floor to charge the laptop and my Kenwood TH-D74 acting as an APRS tracker while I was on the move; the inverter introduced some noise on 40m, so I shut it off while on the air.

From previous operations, I identified a need to monitor battery voltage, and I bought a cheap LED voltmeter (Amazon affiliate link) and wired it up to the tuner port on the back of the FT-991a. This worked OK, but the small wires and long electrical distance from the battery meant there was a few hundred millivolts of voltage drop compared to the battery terminals. I’m going to rethink this to more accurately monitor battery voltage. The other main preparation I took was to get my car windows tinted to reduce heat. It was a very hot weekend in Kansas with temps in the mid-to-upper 90s. The tints did seem to help a bit keeping it darker inside, but I still had to keep the car running with air conditioner on and put sunshades up in the windows. I think this will just end up being a reality of summer operations. I also bought extension cord reels to store my coax and manage it better in the car and throughout set up and tear down – this worked very well!

A highlight of the weekend was getting a call Sunday morning from Bob Heil, K9EID, on 20m. It was a short contact, but he was very pleasant and just mentioned that his name was “Bob.” Otherwise, nothing specific of note occurred on the air. I was able to run several pile ups throughout the weekend. The benefits of moving from 10w last year to 100w this year were very clear both in my score and general demeanor throughout the weekend. It’s just more fun to make lots of contacts!

As far as stops, I operated from two state parks, one city park, and three city/county lakes. I prefer to do this compared to stopping on the side of the road, even in rural areas, to avoid getting questioned by locals and police. I certainly got some strange looks but no one bothered me.

From a contacts perspective, I had a total of 361 contacts with 48 multipliers and a claimed score of 34,656. This included 139 40m contacts and 222 20m contacts. 40m was in decent shape for most of Saturday, but it was totally dead on Sunday. 20m was in great shape Saturday and fairly bad shape on Sunday. Still, I was amazed how a random California or New York station would pop out of a dead band on 20m!

For next year, I’m considering using a different antenna setup that allows me to do more road-side operations with less required set up. This would mean I wouldn’t have to travel as far into counties to scout out public parks. With my current setup, it is just too big of a production and eye-raiser if someone drives by and complains. The other change I’d make is to make my route a bit more manageable. I planned my route to put Cowley and Pratt on the air as no one else had originally volunteered to do so. I also hit neighboring counties that were either missing SSB ops or were only set to be on the air for one of the two days. This changed in the final days leading up to the event though, so I did a lot of driving that meant less time on the air. Next year, I’m going to aim for some county lines and/or corners and try to stay a bit closer to Kansas City.

All in all, this was a very fun weekend out activating counties. Bob, W0BH, does an amazing job organizing the Kansas QSO Party, and the strong participation is an indicator of his devotion to it. I’ll definitely be on next year!