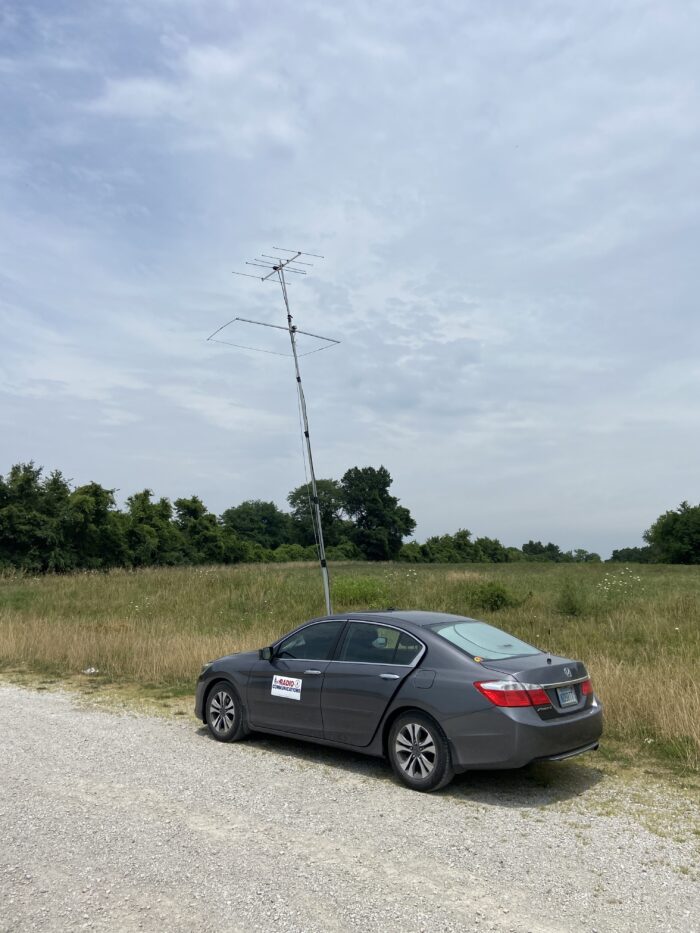 My first stop was EM38 at the Odessa Reservoir outside of Odessa, Missouri. Despite it being a Saturday afternoon, the area was very quiet. A few fisherman left shortly after I arrived leaving me alone for a few hours out in the hot sun. My setup in the car included a backseat tray for the laptop (Amazon affiliate link) and the radio on the seat next to me. This worked fairly well (the shelf was excellent in fact), but I desired a better “shelf” of sorts of the radio so that I didn’t have to turn 90 degrees to use the radio. This was one of the key takeaways that I have since solved (see my upcoming 2022 Kansas QSO Party report for details on that). At this spot, I made a total of 21 QSOs including four on 2m (one SSB and three FT8) and 17 on 6m (three SSB and 14 FT8). 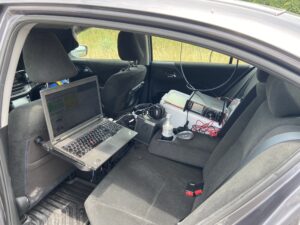 Unfortunately, it was very hot at this point, and I really overextended myself that set me up for a rough rest of the day (I also should add that I ran 11 miles that morning which didn’t set me up for success the rest of the day). After trying to sweat it out with the car off and the windows open for awhile, I had to keep the car and AC going. My other key takeaway from this weekend was to get my windows tinted to help reduce sun heat as even the AC had trouble keeping up. Sunshades on the windshield and rear window were essential but not enough to keep the sun from beating on me.

My next stop was Ray County Lake in EM39 just north of my previous spot. This was another decent spot in terms of location and privacy, but I felt fairly sick at this point from the heat earlier in the day. I only made 10 QSOs here all of which were on 6m. Three were on SSB and seven were FT8. The highlight for this spot was working someone on SSB who was very excited to grab a new Missouri county. I decided to leave this spot earlier than originally planned and headed to my girlfriend’s house in North Kansas City for the night.

Early the next morning, I headed to Englewood Park in Kansas City for EM29. This was actually a nice spot given its relative height and location near the center of the metro area. I was hoping that would mean 2m QSOs were likely, especially on FM, but no such luck. I made no 2m QSOs here. There was a nice opening on 6m to the SW USA though which got me 24 QSOs, nine of which were SSB. I even had success running a small pileup during that time.

My final spot was Shawnee Mission Park in EM28 which I also used in the 2020 ARRL June VHF Contest. Although it was another hot afternoon, I was able to stay mostly cool for my latest few hours in the car. I only made 12 QSOs here but a nice mix with five on 2m (one was SSB and four were FT8) and seven on 6m (all FT8). It was nice to finish out only about five minutes from home which was why I planned my route this way.

All in all, my first CQ WW VHF Contest was fun but notably quieter and slower than my experiences in ARRL June VHF Contests. The radio worked excellently for this contest and the new LiFePO4 batteries I had worked out nicely as well. Aside from the needed window tints and radio shelf idea, my other notes were: